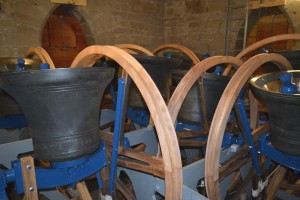 Bells “Up” ready for ringing

In 1717 six bells were cast by Abraham Rudhall of Gloucester and hung in the tower of St Andrew’s church. Little is known of the history of the first two hundred years of the bells or the ringers who rang them.

In 1906 the bells were rehung in a new cast iron frame. The tenor was recast and two new lighter bells were added to make a ring of eight bells. All the work including the casting of the bells was carried out by Mears & Stainbank, now known as the Whitechapel Bell Foundry. Until 2015/16 the only work of any significance has been the replacement of headstocks on the sixth in the 1940s and treble in the 1970s.

In 2015/16 the bells were removed from the tower by Whites of Appleton. The crown staples were drilled from the 1717 bells and resin pads were cast on the tops of the bells to provide a flat surface for the new headstocks. The bells were retuned at the Whitechapel foundry. More details of the latest maintenance project can be found on the 2015 Project page.


The diagram below shows the current arrangement of the bells in the frame. During the latest project the wheels on the third and fourth were repositioned from the north side of the bell to the south side. The result is a better rope circle in the ringing room. Click on a bell to find out more about it!